On Thursday 14 December, Gospel Bell played a concert in aid of ‘Singing for Syrians’ at St Mary’s Parish Church, Adderbury, Oxfordshire. An enthusiastic audience turned out for this charity fund-raising event in support of Syrian refugees. Guest speaker Victoria Prentis MP (pictured below and seated in the centre) hosted the Parliamentary launch of this charitable initiative on 5th July 2016 and Victoria explained that all of the funds raised are used to pay the salaries of medical staff working in areas such as war-torn Oleppo and to provide them with medical supplies and resources.

The band were really pleased to discover that one of several representatives attending the event from the Syrian refugee community in the UK had brought his bass guitar with him. He had previously played double bass with a leading orchestra in Syria and so he slotted right in playing lovely bass melody lines. He is pictured with his wife (who celebrated her birthday with us) and (left to right) Sean, Richard and Troy  – together we were an awesome rhythm section! 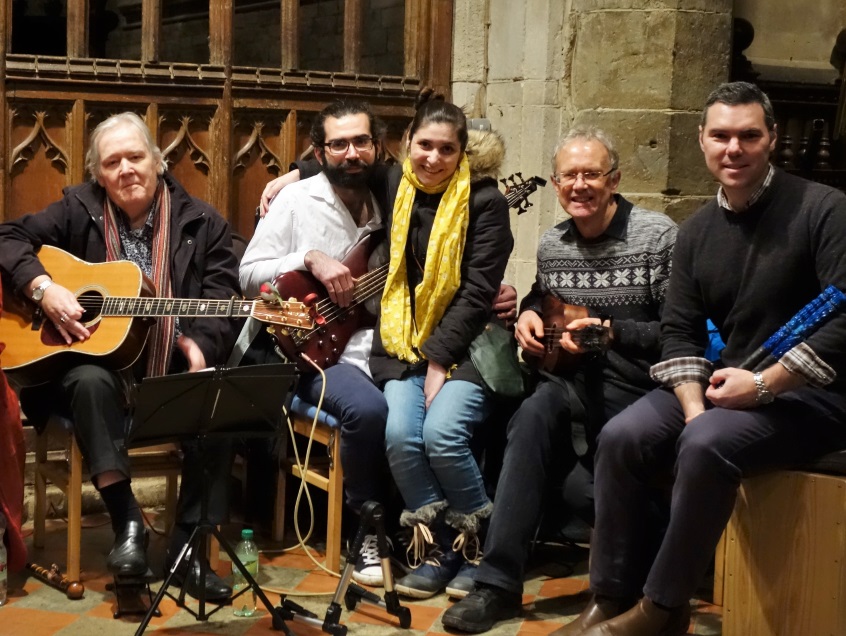 We’d like to thank Jean and Stephen Fletcher for hosting and organizing the event at St Mary’s, the representatives from the Syrian community in High Wycombe, Victoria Prentis and all who attended a moving and enjoyable celebration of the positive work that ‘Singing for Syrians’ is doing in the aftermath of terrible loss. We felt privileged to play for such a good cause.